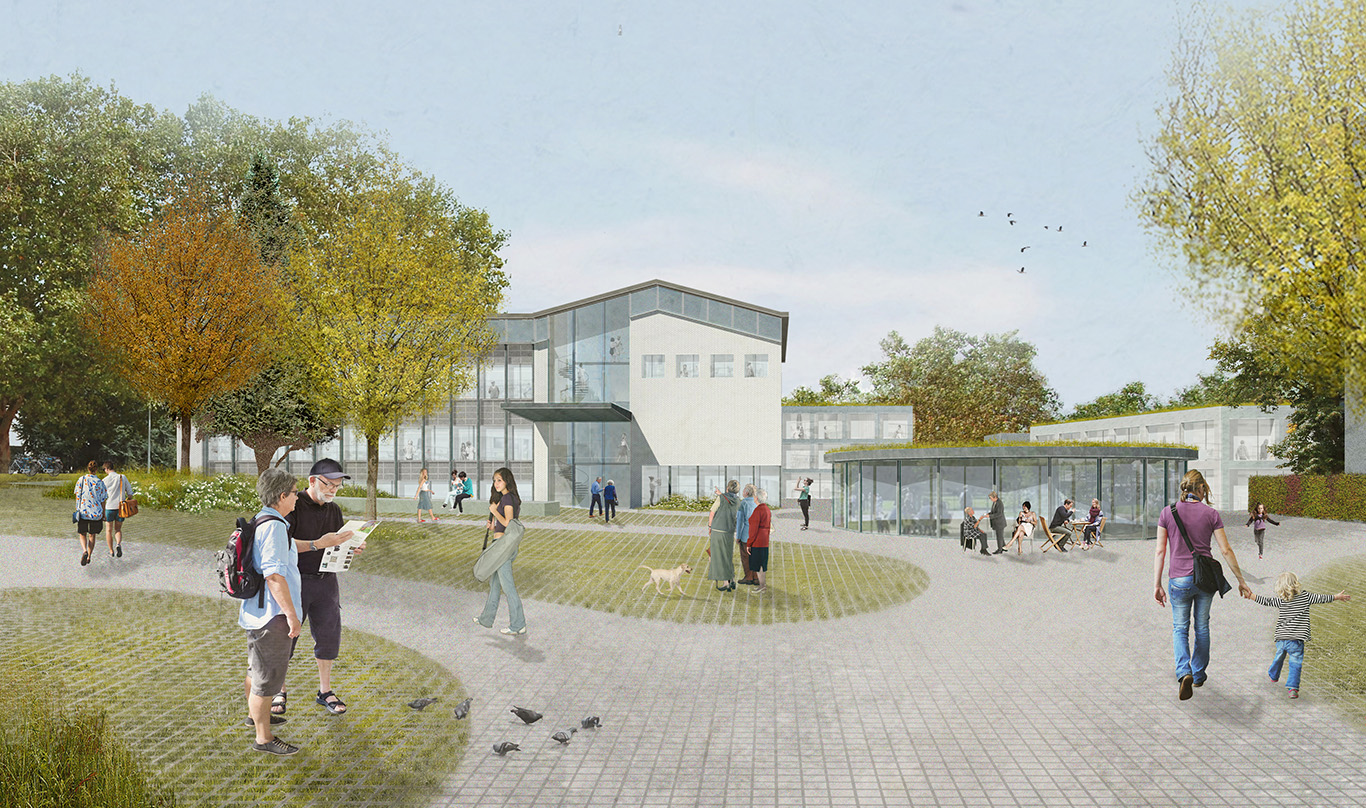 Urban plan for the center of Haverlee

As part of the competition organized by the Belgian city of Leuven, we prepared an urban plan for the centre of the Heverlee district, which included, among other things, a plan for the development of the former town hall building and sports and recreation areas (facilities of the tennis club, car parking and park). In line with the city's green development policy, we wanted to lighten car transit introducing a speed limit of 30 km/h and connecting the new cycle lanes in the district to the main cycle loop in Leuven. We added greenery and decided to create flat and leveled surfaces to fully exploit the potential of a pedestrian and cyclist-friendly space. Because the residential core of the district is compact and there are short distances between the main areas of Heverlee's public life, all solutions in the project were designed to combine central urban functions (spatial, cultural, social) to achieve sustainable adaptation.

The revitalization of the old town hall building was based on the use of its greatest assets, i.e. its central location and its accessibility, which is distinguished by its pro-social and public character.  We did not want to give up its social usefulness, but on the contrary, we wanted to stress that its renewal and adaptation for a local cultural centre could bring a city-forming and culture-creating value for the inhabitants of Heverlee. Therefore, in the project, we have taken into account the need to renovate the building and transform it in such a way that it meets contemporary standards. For this reason, we proposed the removal of stairs that restricted accessibility for people with mobility difficulties and added a mezzanine with a direct entrance from the adjacent square. The public value of the space around the town hall was enhanced by the construction of three pavilions, creating a new urban agora for meetings. Each of the newly created places fulfills a designated function (e.g. a café, a music academy, a workshop space), but there is a dynamic transition between them responsible for mutual relations and overall complementarity, which corresponds to the daily rhythms of urban activity. At the back of the old town hall building, we planned to create an additional space with low stairs, thanks to which Heverlee gained another city forum, which not only works as a place of relaxation, but is also perfect for a public presentation of theatrical performances. The front part of the courtyard has been arranged in a way that attracts strollers to a temporary stop for rest, but at the same time takes into account the need to guarantee space for a weekly market. Therefore, we decided to use semi-cured and semi-paved green pavements that provide durability and accessibility for all users.

In line with Leuven's green urban policy, we proposed to redesign the existing sports and leisure facilities in the vicinity of the park and the Dijle river. Our priority was to restore the area to its natural ecosystem, thereby maximizing the benefits of combining the planned spatial activities with the green area along the river. Following the above idea, we have planned a comprehensive reorganization of the structure connecting tennis courts and parking lots. We eliminated the parking lot and moved the existing sports fields to a multi-functional and environmentally friendly sports and recreation complex. On the two floors of the sports facility, we have provided spaces for tennis, while on the ground floor we have created four hundred parking spaces. The latter can be transformed into a new public space in the future by means of easily dismountable platforms. The façade of the buildings has been covered by a grid with growing green vines, which naturally harmonizes the building with the surrounding landscape. For a better integration of the sports and leisure area into the green area along the Dijle, we decided to design a new park that would extend the natural park and bring the river closer to the public space of the city. As a result, the local community has a new place to meet and do business together.